The man who inspired it all

Beloved, yet little known, Capitaine Jacques Henri Charbon (1628-1720) entered the world on Hispaniola's French-settled island of Tortuga on 11 July 1628, son of French merchant Henri Charbon and his wife Luisa who were visiting Hispaniola with an eye toward one day starting up a sugar plantation. When Luisa's pregnancy required she be confined to bed, the couple rented rooms on the island, planning to stay just long enough for the baby to be born and Luisa's fragile health to normalize before returning to their home in Lyon, France. They never intended to remain in Hispaniola. Instead, they never left.

Ambitious merchant Henri had a head for business, and it didn't take long before his small sugar cane crop yielded dividends. But just one year after the Charbons' arrival, Spanish forces under command of Don Fabrique de Toledo attacked Tortuga. The Charbons along with most of their neighbors fled into the woods, leaving their land and possessions behind. With the money Henri had on hand, he booked passage for him, Luisa, and little Jacques to sail back to France. It was at the Charbon home in Lyon that Jacques first met his sister, Béatrice. She was three years older than he and had been left in the care of Luisa's sister when the Charbons went to scout the sugar cane fields of Tortuga.

By 1633 Tortuga was back under French rule, and the island quickly became a hub for pirates and privateers to run their operations. Henri Charbon returned to Tortuga with Luisa and Jacques, and re-established his sugar plantation, populating his work force with slaves brought in from Africa. Luisa was horrified at the idea of enslavement, and begged her husband to hire the men as free workers. The couple argued about the situation daily.

The situation distressed Luisa so severely, she became ill, and after eighteen months in bed with fevers and weakness, she died. Little Jacques was five at the time. Henri became surly and prone to drink. He lost all interest in rearing Jacques and had the boy shipped back to Lyon. Although Jacques became close to his sister, he disliked his staid and uneventful life in Lyon and yearned for the rowdy streets of Tortuga.

After a few months, Jacques stowed away on a ship bound for Hispaniola, determined to take up the seafaring life. When the captain of the ship found Jacques, he took an instant liking to the lad, praising him for his pluck and daring. Though a privateer, Capitaine Francis (no one is sure of his real name) was considered fair and generous—traits Jacques admired and strove to emulate.

Two years thereafter, when Jacques was only seven, slaving on Tortuga came to an immediate halt. Jacques is credited with being instrumental in freeing the slaves, enlisting Capitaine Francis and his crew to help, starting with the slaves at the Charbon sugar plantation.

In 1848, when the Peace of Westphalia treaties were signed, bringing to a close bothe the Eighty Years and Thirty Years wars, Capitaine Francis announced he would be retiring. He'd already found a captain for his ship, he was merely waiting for the man to claim it. For months the crew speculated on who the new captain might be. Skirmishes broke out and many a wager was transacted regarding the identity of the mystery seafarer.

On Jacques twenty-first birthday he sat down with his mentor and explained he wanted to strike out on his own and do at sea what Robin Hood had done on land—specifically, take from those who unjustly acquired their fortunes and give the monies and properties back to those from whom the blackguards had taken their ill-gotten gains. Jacques said he would miss the crew, but with a new captain coming in any day, Jacques felt he needed to follow his calling. This reportedly sent Capitaine Francis into fits of unbridled laughter. "But my boy, it is you I've been waiting for to claim the captain's chair!"

The crew were ecstatic to hear Jacques would be at the helm. During the evening's celebrations, the crew played cards and dice. The game we now know as BlackJack or Vingt-et-un, was reportedly invented that night—vingt-et-un (French for 21) referring to Jacques' twenty-first birthday. The lucky dice rolls of seven and eleven referred to his birthday, July 11, the seven month, eleventh day.

The reason for his being nicknamed Black Jack was simple. There were multiple crew members on the ship named Jacques. The one with the red hair was called Jacques Rouge, or later, Red Jack when the crew took to speaking English as an aid in trading with privateers from Britain. Capitaine Francis called Jacques Charbon Black Jack since the word charbon translates as coal in English. Coincidentally, Jack had dark hair (thought not black) and always wore black.

Despite Black Jack's protestations that Capitaine Francis live out his days on the ship, the Siren Queene, Francis wanted to retire on land. Henri Charbon had let the sugar plantation fall into disrepair, and when Jacques (now an adult) went to see the state of the place, he found his father sleeping in a lean-to with a few goats, the only living beings other than a handful of chickens remaining on the plantation. Upon seeing his son, when he realized who he was, Henri muttered something about needing a drink and staggered toward town, never to be seen or heard from again.

Jacques cleaned up the house at the plantation and installed Capitaine Francis who took a shine to farming, growing a modest amount of sugar cane and revelling in tending to the goats and chickens and especially the coral hibiscus that were plentiful on the property. The flower, native to the area represented hospitality, generosity, and friendship. It proved to be the perfect symbol for Jacques's signature flag.

The men on Black Jack's crew vied for the position of first mate, going so far as to create verbal resumes and ask for interviews. At last, Jacques selected Toothless Blarney (no one, including himself, knew his real name). Toothless was missing two front teeth which was apparent because he was prone to smiling, and giggling as well, which usually resulted in his whistling through the gaps in his teeth in short mirthful bursts. He was known for his good humor and gentleness, and none who met him ever had a discouraging word to say about him.

When it came to Jacques taking command, there was just one hitch. He had no real plan or vision. He started out by offering his talented crews' labors and trades skills wherever they docked, but farmers and merchants distrusted the sailors, fearing being slain in their sleep, and though many a farmer needed extra hands to bring in a harvest, they turned away Jacques and his men. Discouraged, Jacques sent his crew on holiday while went to Lyon to visit his sister, Béatrice, and her family—and to think.

When he arrived, he found his sister in dire straits. Her husband, whom Jacques had yet to meet, had died at the hands of muggers, leaving Béatrice and their two young children without resources. With the French authorities believing Henri Charbon out of the picture (presumably dead) and Jacques nowhere to be found, the house in Lyon had gone to Henri's nephew. The nephew ousted Béatrice and the children from the house. With nowhere to go, they stayed in the goat stall on the property, just as Henri had done in his last days on the Tortuga sugar plantation.

Jacques was appalled by the ruinous state of his sister and her children. Immediately, he claimed the house as his own, routed Henri's ne'er-do-well nephew, reinstalled his sister, and vowed never to let such injustice go unrighted. At last, he'd found his purpose—to take from the takers and give back to their victims. He took up the cause with vigor, seeking out the worst offenders and returning their stolen treasures to grateful sufferers who'd been wronged.

Black Jack was both feared and revered. Those from whom he took cowered at the sight of his flag, flower and all. Emblazoned with an innocuous coral hibiscus, it promised healing and good fortune, but not for heartless thieves. Those to whom he gave waited eagerly for him to come to their town and dole out treasure. When he boarded a ship, the commanding privateer uniformly greeted him with contempt and threats, but the crews generally offered up their ship's goods, lauding Jacques for taking care of the every day laborer and often asking if they might join his crew.

Years later, Blackbeard would take a page from Black Jack's book, relying on wit and strategy, over violence, to conquer foes and claim prizes. Jacques' biggest prize and crowning glory was an ornate 1000-ton Spanish Galleon built in 1588 during the Armada's heyday. He named the ship la Vie Sirene (the siren life) and kept the Siren Queene docked in Tortuga, giving the ship upgrades and repairs as finances allowed. Despite his success at raiding, he rarely had any money, preferring to give his spoils to those in need.

At the time of his death in 1720, at the enviable age of 91, Black Jack, or The Bounteous Corsaire as he came to be known, had rescued untold numbers of strangers from Hispaniola to Europe from poverty. He died doing what he loved, handing out sweets to children in the Tortuga marketplace when he quietly slumped over, seemingly falling asleep with a smile on his face, never to awaken.

In recognition of his munificence and his care for children in need, Shared Treasure Hunt was conceived. It begins on 7/11, his birthday, and runs 21 days in homage to the game created in his name.

If you wonder why you've never heard of the man himself, you can thank King George for that. He made sure all references to Charbon were erased to ensure his privateers were not impeded in their work and to prevent piracy from being romanticized.

The legend of Black Jack now lives on through stories told 'round the campfire. A 20th-century descendent of his sister said to resemble him was a hearty magnanimous fellow named Blackhearted Francis known for his infectious belly laugh. He met his end under dubious circumstances just before graduating from boarding school at the age 20, a year younger than Jacques was when he took command of the Siren Queene.

Shared Treasure Hunt is offered in the same spirit of kindness and generosity that made Black Jack and the crew of la Vie Sirene a force for good, giving hope to families and children in need. 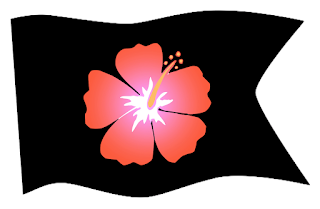